When you book with an account, you will be able to track your payment status, track the confirmation and you can also rate the tour after you finished the tour.
Sign Up
4290

From Cluj 6 days tour. Travel back in time, medieval time, to the 12th -15th century, when knights, settlers, kings roam around, everyone trying to gain someone’s favor for land, money and privileges. What we’re left with today are castles, citadels and fortresses, some in ruins, some intact, history facts, legends and myths, some scary, other funny, few nottobementioned, cities build on top of ruins, settlers, invasions and strong willed population. Exposed history at its best!

your location in Cluj and/or airport

Stop At:  Alba Iulia citadel
Alba Carolina, a Vauban star shaped fortress build in 18th century, one of the most impressive of its kind in S-E of Europe. Also known as Karlzburg after the Austrian-Hungarian king, Karol the VIth, the fortress holds inside its walls the main touristic attractions of Alba-Iulia, one of which stands out: St. Michael cathedral, a valuable architectural monument in Transylvania, with the same age as its sister in Paris, the Notre Dame.

Stop At: Deva fortress
A 13th century fortress build to face Mongolian invasions. From its still standing towers, administrative, housing and defense buildings, you get a panoramic views of Deva city, the landscape and Apuseni mountains.
We’ll stop for the night in Deva at a bed&breakfast guesthouse.

Stop At: Hunedoara’s Castle or Hunyadi or Corvin Castel
A gothic-renaissance fairytale castle build on a cliff in 15th century, the biggest medieval building with civil and military functions. The French inspired castle still reflects the greatness of an illustrious family, the Hunedoresti or Corvin family, who were once in charge of Transylvania.

Stop At: Sibiu old city
A Saxon build city, Europe’s cultural capital in 2007, the 8th most idyllic city of Europe by Forbes magazine and a must see for any traveler who comes to Transylvania. If you are interested in culture, this is the place for you: Brukenthal Palace, Astra village museum, the Lutheran cathedral, you’ll be surrounded and submerged in history. Bring comfortable shoes for its narrow rock paved streets.

We’ll stop for the night in Sibiu.

Stop At: Fagaras fortress
A wooden 12th century fortress, burned down by the Tatars, rebuild and enlarged in 15-17th centuries, mostly used as residence for Transylvanian princes and their families. Build in Italian Renaissance style, records show the interior must have been luxurious in the 17th century, but little of it has been preserved, because by the 18th century, depraved and stripes of its decorations and fancy furniture, it became a military garrison.

Stop At: Dracula’s castle
A defense 13th century castle with history and legends surrounding it. Build on a steep cliff, impressive on the outside as well as on the inside with its rock narrow corridors still holding the footprints, character and bigger than life atmosphere of some of its former inhabitants, the two most famous people in Romania, one made a legend by a book, the other by history itself: Vlad the Impaler and Queen Maria.
We’ll stop in Bran for the night.

Stop At: Peles castle
Build between 1873–1914, in neo-renaissance style, at the initiative of the first Romanian king, Karol I who used its own private funds for it, the palace was the summer residence of Romanian royalty. It was nationalized after 1948 when communist regime took power. The rumor has it dictator Ceausescu and his wife Elena known for their love of golden faucets and luxury, spend only one night under its roof spooked by the royal staff palace museum which told them a mushroom infiltrated the wooden beams and rooms and might cause harm to people too. A white lie that worked keeping the palace somewhat intact during decades of communism.

Stop At: Rasnov citadel
Part of Transylvania defense system protecting the villages inside, a 13th century fortress built by Teutonic knights as a controlled access in Transylvania. It was conquered only once: in 17th century, the fall was caused by the lack of water due to the discovery of a patch of a secret spring by enemy troops.
Stop At: Brasov old city
The regional capital of Transylvanian Saxons and a large commercial hub on the trade roads between East and West. Transylvanian Saxons were bestowed with privileges and invited in Transylvania by Hungarian kings to develop towns, build mines and cultivate the land. They arrived between 12th and 14th century from Rhineland, Flanders and Moselle region to play a decisive role in Brasov’s development. They’re traces can be found in the Black Church, old city watch towers, the mayor’s former office building (Casa Sfatului), the rope street (narrowest street in Europe).
One night accommodation in Brasov.

Stop At: Rupea citadel
The name of the 14th century peasant citadel comes from Latin: “rupes” meaning stone and was the main linking point between the three Romanian provinces: Transylvania, Moldavia and Wallachia. The citadel was abandoned and left in ruins in 1790 due to roof damages caused by several storms. During the communist regime the citadel was planned for demolition for accessing the basalt stone that forms the hill. Luckily, it didn’t happen.

Stop At: Viscri fortified church and village
A UNESCO World Heritage Site, build around 1100 by Szekler population and taken over by Saxon colonists in 1185 thus explaining why the unique gothic church displays a plain straight ceiling rather than a traditional vaulted one. Prince Charles felt in love with this place and its surroundings buying two houses and starting a foundation here.

Stop At: Medieval city of Sighisoara
The best preserved inhabited medieval Saxon city, held an important strategic and commercial role in central Europe for many centuries. Also the presumed birthplace of Vlad Dracul made famous by Bram Stoker’s book and cinema. A city much loved by tourist with its main attractions: the 13th century, 64m high clock tower, the weapon museum, the covered all stone staircase, the church on the hill and the old gothic cemetery.
One night accommodation in Sighisoara.

Stop At: Medias citadel
A city mentioned by Romans as Per Medias, meaning “the crossroads town”. In 13th century Saxons renamed it Villa Medies and strongly fortified it, the 33 crafts guilds building, maintaining and defending the bastions of the city against enemies.

Stop At: Aiud citadel
The 13th century citadel, fairly small with perimeter of 350m, in the shape of an irregular pentagon. Inside some of its still standing 1,2m thick walls is the maximum security prison of Aiud, place of communist horrors and tortures, the final resting place of Romanian anticommunist elite, still an operating prison today. 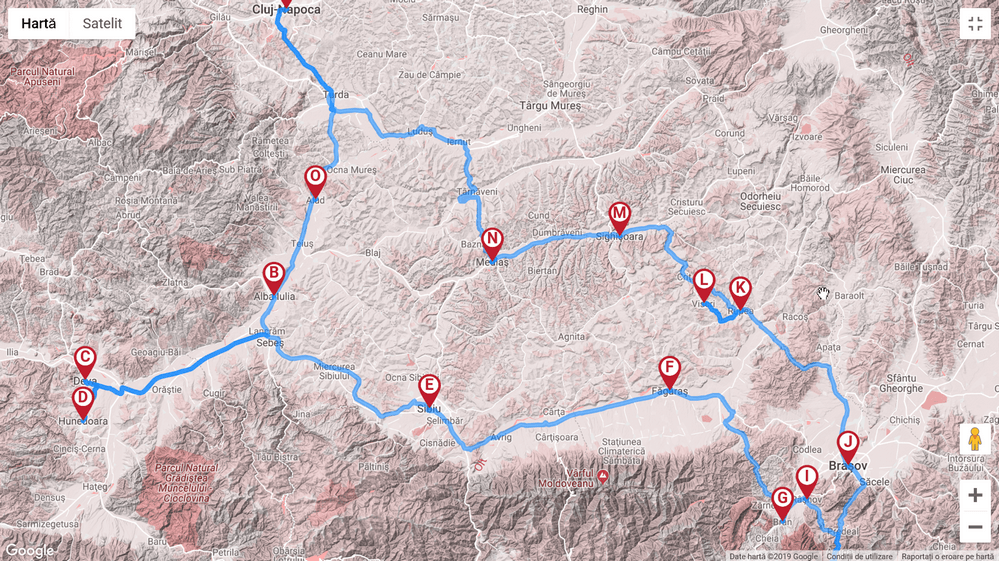